Sooner or later, we discover the principle of sowing and reaping: what we put in is what we will get out. Every choice has a consequence, every investment a return. But this principle appeared to be upside down in my life. I didn’t think I was getting a fair return on my investments. To be honest, I felt shortchanged. While I had made my share of mistakes, I honestly thought I was working harder at life than most people, and I assumed all my hard work would eventually pay off.

I was wrong. Just when I should have been reaping the benefits of my life’s efforts, my marriage was failing, my children were rebelling, and my career was over. Circumstances veered out of control as I helplessly watched situations became critical. I felt like I was rowing a boat full of people who wouldn’t pick up an oar and help row. I had no answers (and no one else offered any), but I refused to abandon my family, so I just kept rowing. Oh, and one more thing: I was almost a hundred pounds overweight. Try that on for size.

I’ve always been a fixer. If something is wrong, my view is comprehensive: let’s find a permanent solution so we won’t have to deal with this again. I’m just not a band-aid kind of girl. But concerning my own personal chaos, I didn’t have a fix. There were no answers. I kept wondering how a nice girl like me ended up in such a mess. For someone who had tried to live a life of excellence, this had to be some kind of joke.

My faith was strong, yet my doubts loomed like thunderclouds. My confidence in God was sure, yet I could not silence the questions. I loved Jesus and longed for His touch, yet I wondered if He had forgotten me. It surely seemed that He had.

In my frustration, I became offended at God. I withdrew from serving the Lord for approximately five years—a big deal for me. (I call this my spiritual pout.) During that time, I didn’t consider myself backslidden but simply desperate. I hoped that if I pouted long enough, the Lord would come after me and rescue me and tell me He loved me.

I remained as confused as ever. But one thing I knew: God’s Word doesn’t lie. So I began to blame myself. I’d always sensed a calling on my life for something great—an anointing, a calling—but the barren landscape of my foreseeable future offered no such promise. Whatever calling I was supposed to have, I thought, I missed it. The threat of long-past opportunities weighed heavy on my hope, and I suspected it was too late for my worn-out dreams to materialize. So I just kept rowing that boat, wondering all the while why the two-plus-two of my life never did add up to four.

Like Gideon, I was tenacious and not inclined to quit. But even I had my limits, and the time came when I reached the breaking point. I well remember that summer day when I stood in my laundry room and experienced what felt like a shift in my soul. Something in me moved, sparked by a seemingly insignificant event—a small thing, but it was enough. Like the straw that broke the camel’s back, one minor incident triggered an avalanche. A switch flipped, a door opened somewhere, and all the baggage of my past poured out. For the first time ever, I allowed that to happen. I didn’t try to push it back in or close the door or try to run away. I simply watched as that torrent of old baggage continued to come. And it kept coming.

Here is an excerpt from my testimony:

Then one day I hit bottom. This magnificent event occurred on a quiet Sunday afternoon, during a Fourth of July weekend, as I was working in my laundry room. Through a small, insignificant incident, my eyes were opened, and I had to admit to myself that I could not fix my life. I couldn’t fix myself, I couldn’t fix the controllers, I couldn’t fix anything. That I’d ever thought I could suddenly appeared to me as sheer foolishness. I had to acknowledge I had been lying to myself because I didn’t want to see the truth. I had ignored hard evidence that was right in front of me so I could hold onto what I wanted to believe: that I could create a beautiful life through my own efforts and make myself into the kind of person others would accept. So I made a decision for truth that day. I pledged never to lie to myself again, ever. About anything.

I knew I had to make some changes, and it had to start with me. Amazingly, I managed to recognize the importance of changing myself before changing my circumstances. I didn’t have a clue what was to become of my life, but that wasn’t my primary concern. My most pressing concern was me. I was the problem. I was urgent.

Rising from within me emerged a reality, a Truth. I knew I had to be brutally honest with myself and begin viewing situations and people as they really were instead of how I wanted to believe they were. I had allowed unbridled turbulence in my life by excusing the bad behavior of the controllers. Yes, I had allowed it, and I had to own that. I had endorsed their contempt through unquestioning support. They had shown me who they were from the start, but I had chosen to look the other way. I had judged their intentions by my own, absorbing the brunt of their cruelty in the assumption that they didn’t mean any harm. I had put my faith in faithless people and my trust in those who were untrustworthy.

Living a lie is often easier than facing reality. Staring the Truth in the eye requires courage. When I felt threatened by failure, I just rowed harder. I stayed so busy I didn’t have time to think about my unmanageable mess—but all along, I was afraid. I was terrified to confront the facts of my life, intimidated by the rawness the Truth might bring. I was afraid of getting real.

I needed to believe the lie to stay in the dysfunction; otherwise, I couldn’t have endured it. I needed to withstand the abuse and the contempt because that was part of the performance game—to be strong enough to bear up under any weight and earn my value through sacrifice. Where the Controllers failed, I made up for in devotion, pretending the pain didn’t matter. (But then, I was convinced that I didn’t matter.) Through thick and thin, I held on to what I wanted to believe—that I was enough, that I could handle it, that in the end everything would work out. And I was wrong. Oh, was I ever wrong! I was never enough for all that.

I had lied to myself.

I had missed it by a long shot. The grave mistake I made was to think I could bridge the gap for the controllers by offering myself as a resolution to their deficiencies. I thought I could provide solutions for whatever it was they were missing. Did I think I was God? Did I think I was the Healer of hearts? There I was, willing to stand in the gap for these people when I didn’t even know what their gap was about! In my inclination to be all things to all people, I’d placed myself in the precarious position of being where I did not belong: right in the firing zone.

Like planting seed into stony ground, I had sown the days of my life into the infertile soil of invalid assumptions and false hopes. I had not received a good harvest, nor did I deserve one. I had lived to please critical people who can never be pleased and borne the responsibility of the behavior of others, thinking I was doing the right thing. But we can never be responsible for the conduct of others, only for ourselves.

That day in my laundry room, I acknowledged that my situation was not a winnable one. It had never been. I could not in good conscience blame the controllers because their contempt didn’t have anything to do with me. It was about them. They were precisely who they were before I ever appeared on the landscape of their lives—and if I disappeared off that landscape, they would continue business as usual. I had gotten hurt only because I had allowed it.

The failure of my life was no longer about the controllers; it was about me. I, and I alone, was responsible for my mess.

I sometimes wonder why it took so long for me to arrive at such an obvious conclusion. Why did my life “burn to the ground” before I realized I was in a losing battle, a battle I could not win? Most people would have jumped ship a long time before I did. I believe the answer lies in my incredible strength of purpose and firm resolve. I have a solid spiritual foundation that, with my natural tenacity, compelled me to live each day with an impenetrable determination. I refused to accept failure, and I wasn’t going to quit! I kept believing it would all work out, and I refused to believe anything else. I focused on the good and pretended the rest wasn’t happening. I thought I was keeping the faith.

When it finally did come, surrender was a relief—but it wasn’t easy. I had to all but pry my fingers off my old hopes. The urgency to abandon all my past efforts brought a stinging awareness that my dreams would never materialize. During the years of fighting for what I thought was right, I had wasted so much of myself. How could I have allowed that to happen? How could I face the fact that I could never recapture those lost years? What was I to do with my life? What now?

I didn’t know the answer to “What now.” I didn’t have any idea what to do with my life—or with me, for that matter. I didn’t see any available options, and I wasn’t willing to create some. That would be too much like lying to myself again. Just the thought of the future was like looking into a black hole.

Oddly enough, I was not overly concerned about the future. It’s not that I didn’t care; I couldn’t afford to care. I didn’t have a fix for the future, and I had no time to waste. I could only manage each day as it came. I was adamant about being true to myself for the first time ever, regardless of the cost. I would not go back on that commitment.

Once I connected with this amazing Truth, something fell into place. It was different, but I loved the way it felt, and I wanted more. I began to look for the Truth in all situations—in every little thing and every big thing. I found that facing reality isn’t that hard. I decided I’d rather face an ugly Truth than hide behind another dressed-up lie, and I was willing to face the consequences of that choice. Whatever happened, I would take things one step at a time. But I would never, ever lie to myself again.

I believe I felt a whisper of self-respect blow through my soul.

QUOTE: “When someone shows you who they are, believe them the first time.” — Maya Angelo 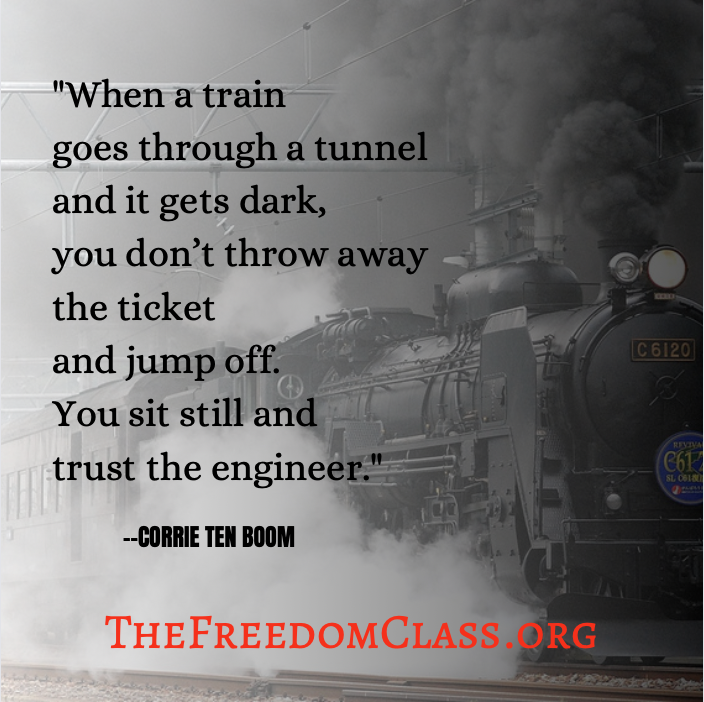 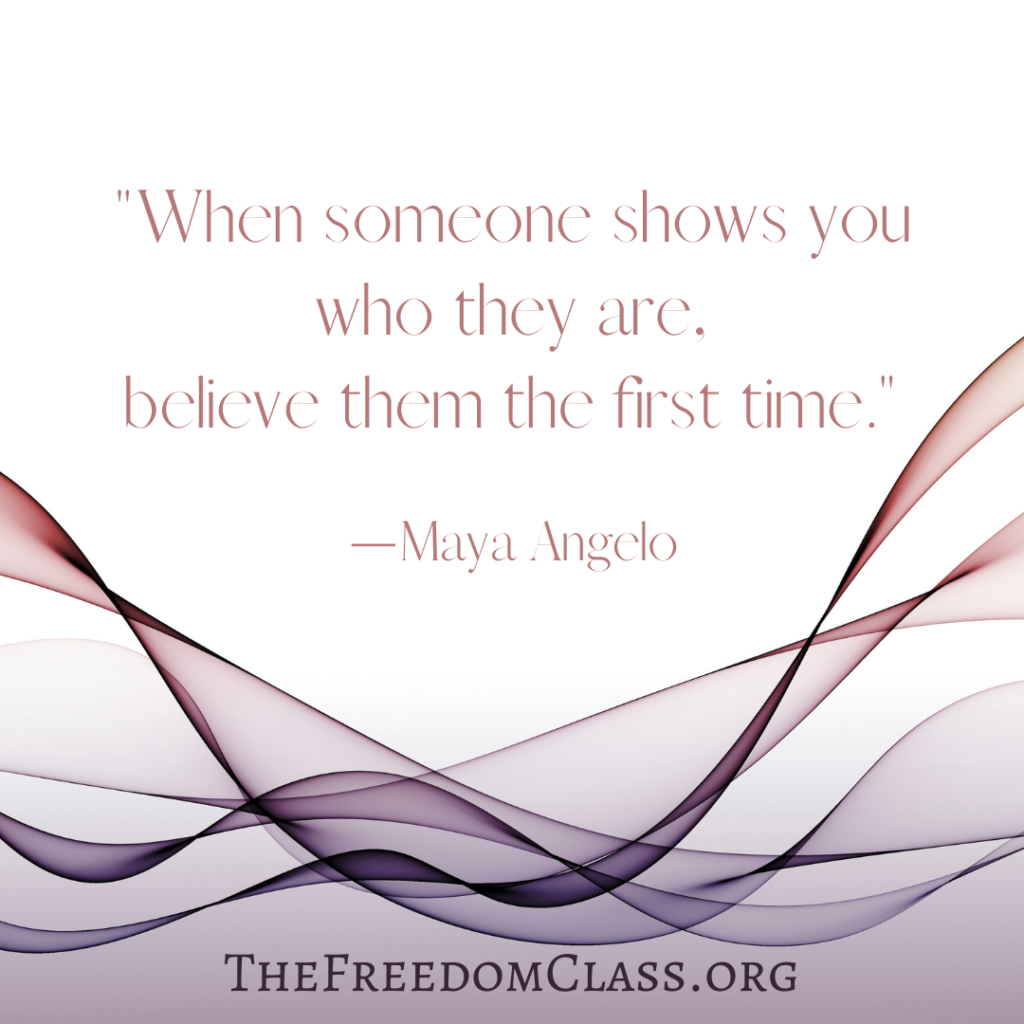 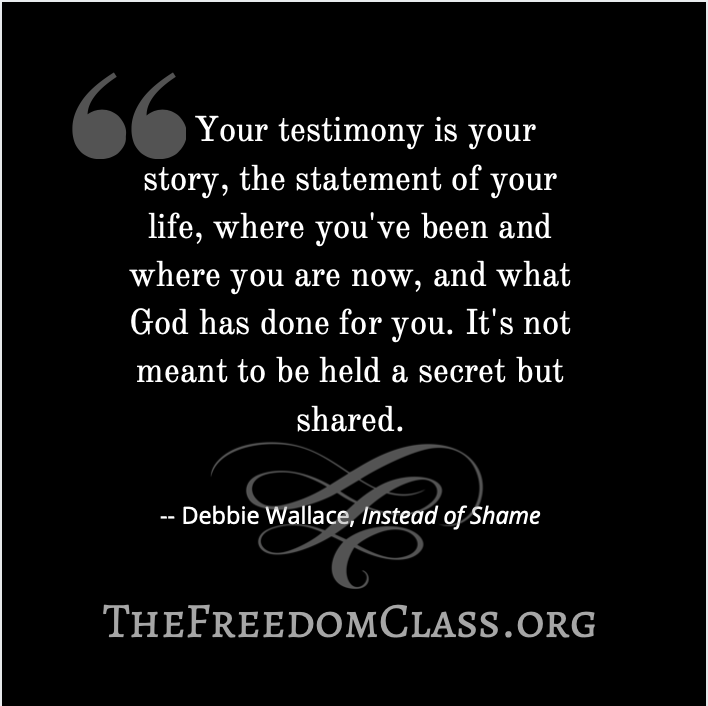