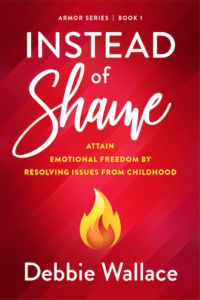 Book One: The Armor Series

Do you secretly struggle with pain from the past? Debbie Wallace has a POWERFUL MESSAGE for the more than 80 percent of us who do.

Deep emotional scars are often created in the early years through childhood trauma—such as abuse, neglect, and adverse conditions. The adult children of abuse are often plagued by low self-worth, self-contempt, and a general heaviness accompanied by confusion, depression, and anger.

INSTEAD OF SHAME presents a fresh approach to emotional injury by dealing with issues from childhood with courage and clarity.

Whether you’re a new Christian or a seasoned believer, you can boldly confront and permanently resolve the effects of a difficult childhood. Debbie Wallace says what God did for her, He’ll do for you! If you’ve been dragging around some baggage since you were a child, take a closer look. You can attain emotional freedom you never dreamed possible!